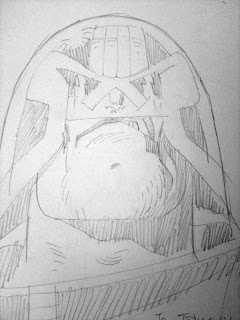 Mike McMahon is probably best known to most of us for providing the art for the first published Judge Dredd story.
Judge Dredd was created for 2000ad in 1977 by writer John Wagner and artist Carlos Ezquerra, but problems in pre-publication led to both creators walking out, and the first published story was written by Peter Harris and Pat Mills, and drawn by the inexperienced and young artist, Mike McMahon. Mike was chosen by Pat Mills, who was editor at the time, because he could do a passable imitation of Ezquerra's style, but the more he drew the more his own style emerged. Before long he became one of the character's most regular artists.
Mike has also provided art for characters such as Sláine and ABC Warriors, and the mini-series The Last American.


Thanks to Jonathan for this. 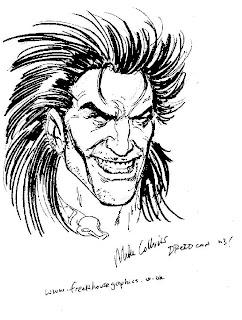 Mike Collins is a comic book artist and writer, from Wales. In the mid to late 1980's, Mike both wrote and drew strips for the UK division of Marvel Comics, including Spider-Man, Transformers, Dr. Who and Zoids. He also worked for 2000ad drawing Judge Dredd, Sláine and Rogue Trooper, as well as writing several Future Shocks.
In 2001 Mick wrote and designed the first ever Welsh language graphic novel Mabinogi in association with Cartwyn Cymru.
Thanks to Dave Evans for sending me this.
Posted by 2000ad Sketch Show at 15:51 No comments: 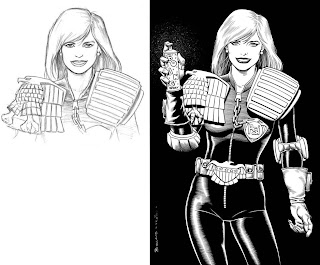 Judge Anderson sketch, with original pencils by Brian Bolland  and inks by Gary Martin, who also expanded on the sketch.
Thanks to Matthew Ellis for sending me this sketch.
Posted by 2000ad Sketch Show at 14:55 No comments: 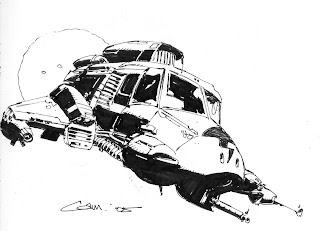 Campbell "Cam" Kennedy is a Scottish artist who is best known for his work on Judge Dredd, Rogue Trooper and the Star Wars spin-off, Dark Empire. His work is very recognisable because of its gritty, energetic and raw look. Following work in commercial art in Glasgow, Cam went freelance and worked as an illustrator on D.C. Thomson's Commando, between 1967 and 1972, before leaving comics to become a professional fine artist. In 1978 he was lured back to comics again, beginning by drawing the Fighting Mann in Battle. As Battle started to wind down, Kennedy started to work for 2000ad.
Cam was instrumental in the creation of several well-known stories and characters for 2000ad. These included the V.C.s, Judge Dredd and Rogue Trooper. John Wagner has also written several stories about Kenny Who?, a  character based on Cam and his early problems getting work in America.
In America, Kennedy started to work with Tom Veitch, producing the creator owned Vietnam War inspired science fiction fantasy, The Light and Darkness War. This led to the pair working on a Star Wars spin-off, Dark Empire for Dark Horse Comics. Cam has also worked on other Star Wars comics, including a few Boba Fett stories with writer John Wagner.
Thanks very much to, Paul Glasswell for sending me this sketch. Paul also said "The Cam Kennedy one was done in the pub at Moniaive.  I just left my sketch book and pens and pencils on the table and Cam couldn’t resist. I had a huge grin on my face when I opened the book to reveal it in it’s full glory.  Let’s face it, it isn’t a sketch, it’s a piece of full comic art."
Posted by 2000ad Sketch Show at 12:12 No comments: 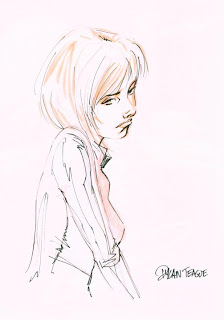 Thanks to John Burdis for allowing me to use this sketch.
Posted by 2000ad Sketch Show at 11:04 No comments: 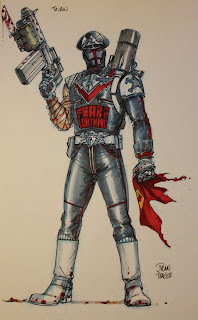 Thanks to Strontium71 for allowing me to use this sketch.
Posted by 2000ad Sketch Show at 08:42 No comments: 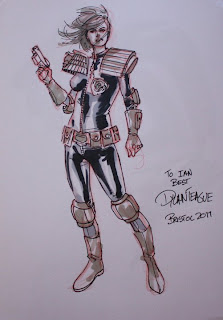 Thanks to Strontium71 for allowing me to use this sketch.
Posted by 2000ad Sketch Show at 08:34 No comments: